Diabetic retinopathy is a complication from diabetes that affects the eyes. It’s caused by damage to the blood vessels of the light-sensitive retina at the back of the eye. Poorly controlled blood sugar level is a risk factor.

Diabetic retinopathy is the leading cause of vision loss among working age Australians and all people with diabetes are at risk of vision loss and blindness. Currently in Australia there are 1.27 registered diabetics and according to the Centre for Eye Health Australia (CERA), on average one in three people with diabetes will develop some form of diabetic eye disease which equals about 423,000 Aussies – one third of those registered on the National Diabetes Services Scheme.

Further, this problem is growing. There are also many other diabetes-related eye diseases – including diabetic macular oedema, cataract, and glaucoma – which have the potential to cause severe vision loss and blindness. However, with timely detection and treatment, 98 per cent of vision loss from diabetes is preventable. 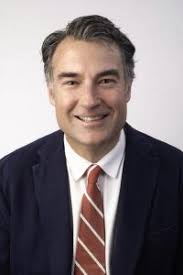 “As an eye surgeon we often see people at the end stage of their diabetes when it is too late to save their sight,” he said.

“My mission this year is to go back to the root cause of diabetes and prevent this looming health catastrophe and challenge our perception of sugar and our relationship with sugar. Sugar is as toxic and addictive as nicotine.

“To reduce blindness, we should also encourage those with diabetes to have more regular eye examinations”.

You can read more on Dr James Muecke here.

Diabetic retinopathy can occur in people with diabetes, caused by damage to the blood vessels that nourish the retina which is the seeing part of the eye.

Diabetes is a metabolic condition characterised by the body’s failure to produce enough insulin, in some cases none at all, or it being simply unable to use it efficiently. Insulin is needed to break down sugars into glucose so they can be used and distributed throughout the body. When insulin is lacking, sugar builds up in the blood (hyperglycaemia), which can lead to diabetic retinopathy. The high sugar content in the blood damages the fine blood vessels in the retina, causing them to rupture and bleed. The retina swells and new blood vessels form, damaging the retina and resulting in the appearance of spots.

Diabetes has become one the biggest public health issues of our times and its effect on eyesight can cause significant vision loss and blindness. It is not uncommon however, to have a diabetes-related eye illness and not even know it. As uncovered in Optometry Australia’s 2020 Vision Index Report, 49 per cent of Australians have never hear of diabetic retinopathy and according to the American Optometric Association, about 79 per cent of Americans don’t know diabetic eye diseases have no visible symptoms.

Diabetes can affect many parts of the eyes in a number of ways, with symptoms increasing in severity as the illness progresses. Eye health problems can include blurring, fluctuation, floaters and double vision. Diabetes can also contribute to cataracts and glaucoma, although the most debilitating impact that the disease can have on the eyes is diabetic retinopathy.

Like a lot of eye diseases, you may not know you have diabetic retinopathy because it shows no symptoms until it is too late as once the disease manifests itself, or is diagnosed, it may be too late to stop its progression.

Diabetes can affect many parts of the eyes in a number of ways, Diabetic retinopathy is the leading cause of vision loss amongst working age people. Video Credit: National Eye Health Institute (USA)

If you are a diabetic, there are some signs however, that could indicate that you have diabetic retinopathy. These include:

If you have diabetes, to protect your sight from diabetic retinopathy it is critical to have comprehensive eye examinations with your optometrist at least once a year to assess signs of potential problems. If you don’t have a regular optometrist, you can find an optometrist near you by using our Find an optometrist search function and/or use the form located on the top of each page of goodvisionforlife.com.au.

A comprehensive eye examination by an optometrist, with a dilated eye exam, is required to detect diabetic retinopathy. During this examination, your optometrist will place drops in your eyes to dilate the pupil which will help them see inside your eyes more easily to inspect for any damage that may have been caused by retinopathy. They may need to take a photograph or scan of your retina for comparison at your next eye examination.

It is important to let your optometrist know if you are a diabetic as we recommend that all people with diabetes have an eye exam every 12 months.

Your optometrist may also refer you to an ophthalmologist, who are medical doctors, for further management and treatment. 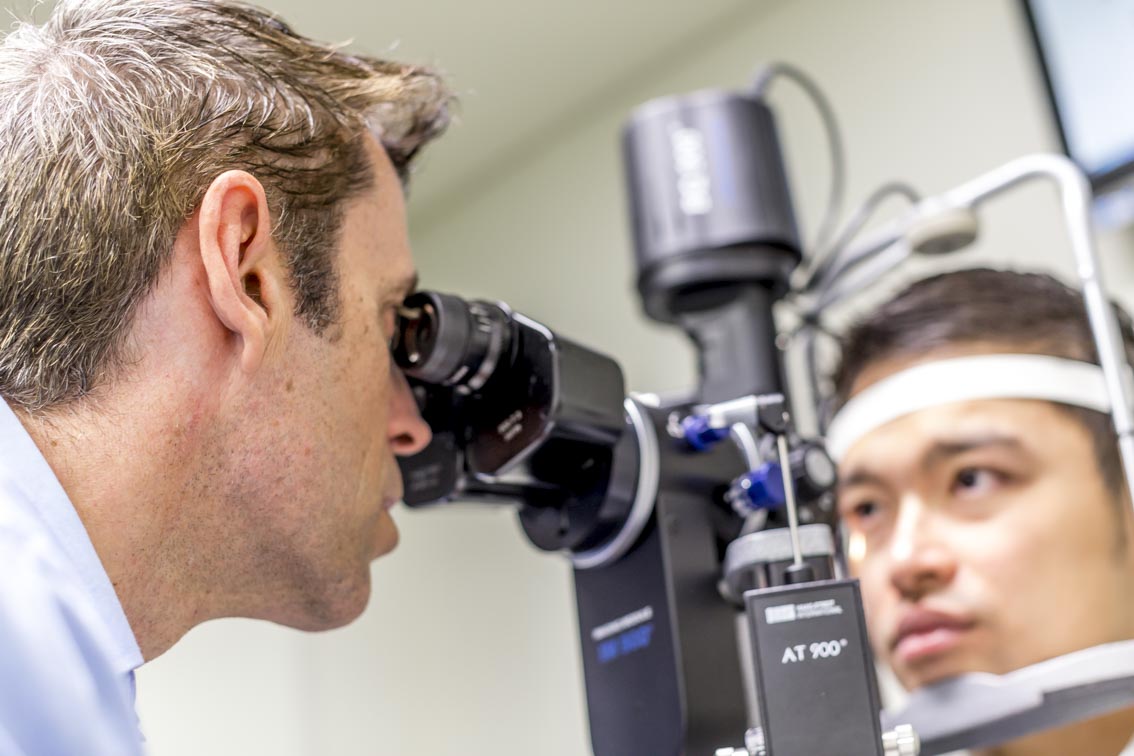 The only way to detect diabetic retinopathy is to have a comprehensive eye examination. Image Credit: Optometry Australia

Who Is At Risk?

Anyone who has diabetes can develop diabetic retinopathy. There are different types of diabetes but those with Type 1 and Type 2 diabetes are more prone to developing retinopathy. Diabetes damages the fine blood vessels at the back of the eye, causing them to leak and hence lead to vision loss.

The longer you have diabetes, the more at risk you are of developing diabetic retinopathy and if your blood sugar levels are consistently high, this also increases your risk.

Age is no deterrent to developing the eye disease as Ebony discovered when she woke one morning when she was 25 and realised that she couldn’t see more than a metre in front of her. She was declared legally blind in one eye and rapidly losing vision in the other. Ebony was diagnosed with diabetes when she was three years old and kept putting off visiting an optometrist for an eye examination.

Likewise, Jess suffered irreversible vision loss at the age of 31 because she too regrets putting off making an appointment to see an optometrist.

Ebony, aged 25, kept putting off having eye examinations but is now legally blind in one eye and rapidly losing her sight in the other due to diabetic retinopathy. Video Credit: Diabetes Australia

If you have diabetes, you should not delay having an eye examination as early detection of diabetic retinopathy is the best way to enable effective and timely treatment of the disease and its potential escalation to blindness. Ensure you have regular examinations even if retinopathy is not detected and your optometrist will advise you of the frequency to return (most likely once a year).

Maintaining a healthy lifestyle is also important by eating the right foods to manage your blood glucose to reduce the risk of either getting diabetic retinopathy or the disease worsening. Behavioural change through lifestyle choices – access to and eating healthy food, weight control, regular physical activity and quitting smoking – helps control these risk factors. (Source: Healthline)

If you do have diabetic retinopathy, your treatment regime will be determined by the type of retinopathy that you have and the stage of the disease e.g. early onset, mid stage or late stage.

In its early stages, diabetic retinopathy is monitored with regular eye examinations with an optometrist.

If more severe diabetic retinopathy is suspected, your optometrist will refer you to an ophthalmologist for treatment. Laser is the most common treatment and it is used to stop leaking blood vessels. Laser also reduces new blood vessel growth to help prevent vision loss. Anti-VEGF (intraocular injections of vascular endothelial growth factor inhibitors) treatments can also prevent vision loss, stabilise vision and in some cases, even improve vision if performed early. Surgical treatment is an option for complicated cases where there is a massive bleed or the retina detaches. Surgery however, usually can’t restore visual function once it is lost. (Source, Fred Hollows Foundation).

I have diabetes, does this mean I will develop diabetic retinopathy?

How will I know if I have diabetic retinopathy?

Often there are no clear indicators that you have, or may be developing, the eye disease. As the disease progresses, some signs may include blurred, fluctuating vision, floaters and impaired colour vision. Vision loss may not occur until the disease is severe.

Am I at risk of getting diabetic retinopathy?

All Type 1 and Type 2 diabetics are at risk of developing the disease. The disease also does not discriminate on age although the longer you have been a diabetic, the more at risk you will be.

My child has diabetes. Does he/she need to have a comprehensive eye exam, even if vision is great?

Yes. All people with diabetes, regardless of age, are at risk of developing diabetic retinopathy, including children and teenagers. There are often no symptoms and noticeable vision loss does not occur until the disease is advanced.

How does an optometrist diagnose diabetic retinopathy?

As part of your eye examination it is common for your optometrist to put eye drops in your eyes when checking for diabetic retinopathy. They may need to take a photograph or scan of your retina for comparison at your next eye examination. If you are diabetic, your optometrist may need to see you once a year. They will refer patients whom they suspect have more severe diabetic retinopathy to an ophthalmologist (eye surgeon) for management and treatment.

Is there a cure for diabetic retinopathy?

The disease can be treated, depending on its stage of progression, but it cannot be cured.

I have diabetes, is there a support network that I can turn to?

Who do I see about my vision?

No information provided on the Good vision for life website is intended to constitute or substitute advice from visiting an optometrist. Many factors unknown to us may affect the applicability of any information on this website. You should seek appropriate personalised advice from a qualified optometrist about any eye health and vision conditions. 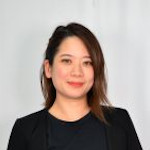 Bio: Sophie Koh is an experienced optometrist who started her career in the Northern Territory. She has broad experience working in public health and corporate settings across metropolitan, rural and outback Australia. She has extensive experience working in ophthalmology teams and training nurses in East Timor, Papua New Guinea and Solomon Islands. Sophie studied her undergraduate degree at the University of Melbourne and was amongst the first cohort of graduates to achieve the ACO Certificate in Ocular Therapeutics. She is currently the National Professional Services Adviser at Optometry Australia. She is passionate about public health and Indigenous eye health. She is devoted to empowering students and colleagues to improve their knowledge and skills so they can play a wider role in improving the health and wellbeing of our underprivileged communities locally and overseas.

Disclaimer: No information provided on the Good vision for life website is intended to constitute or substitute advice from visiting an optometrist. Many factors unknown to us may affect the applicability of any information on this website. You should seek appropriate personalised advice from a qualified optometrist about any eye health and vision conditions.

Balancing work, a social life, relationships, looking after loved ones and getting eight hours of sleep is no easy task.…
Read More »

It’s hard to resist rubbing your eyes when they are itchy, tired or dry, but the short term relief may…
Read More »

Well here is some news which might be well received by many! Next time you’re considering whether to open a…
Read More »